Kyoto; President & CEO: Yoshihito Yamada) announced that table tennis robot FORPHEUS, which was first created in 2013 as a symbol of Omron’s technological expertise and which continues to evolve, was certified as the «first robot table tennis tutor» in the world by Guinness World Records®. 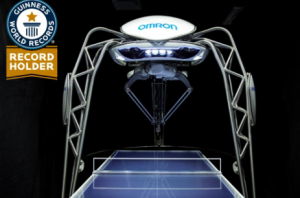 Omron exhibited FORPHEUS in «CEATEC JAPAN 2015» in October 2015 in order to showcase technology that «brings out people’s abilities”. FORPHEUS was certified on January 6, 2016 for a Guinness World Record as the “first robot table tennis tutor”, and described in the Guinness Book of Records 2017 edition as follows: «In October, 2015, the Japanese company Omron Corporation introduced a table tennis robot with a sensor that measures the position of its opponent and the movement of the ball 80 times per second, can predict the trajectory of the ball and hit the ball back, and project the landing point of the ball.”